Technically, my second blog of the month is to be a summary of the books I review on Bay 93.9’s Friday edition of The Catch Up. But seeing as The Catch Up doesn’t return until February, I figured it would be okay to change my intention and combine a book, film and exhibition review. Dungatar – at the foot of the Barwon Park Mansion stairs.

Last year, before the release of the film staring Kate Winslet and Liam Hemsworth, I reviewed Rosalie Ham’s The Dressmaker. The novel, set in the small town of Dungatar during the 1950s, is at turns funny, bleak, poignant and heartbreaking. The story’s main character, Tilly returns after years as a Paris couture dressmaker to the town which banished her as a child. She quickly discovers little has changed, with the petty squabbles, jealousies and prejudices just the same as they’d been twenty years earlier. I enjoyed the book, especially its quirky characters – some engaging, others infuriating, and wondered why it had taken me so long to actually read it. (The Dressmaker was first published in 2000) Now, I am one of those people who often don’t enjoy film adaptations of books (except for Lord of the Rings, and Atonement), so it’d be fair to say I felt a little trepidation at the cinema. I needn’t have worried. The film version of The Dressmaker might be even better than the novel. Well, just a tiny bit. How’s that for strong words!

It’s not only that the movie is true to the novel, that the cast is simply amazing, or that the scenery is familiar. What made the film so wonderful was seeing those stunning dresses created by Tilly. 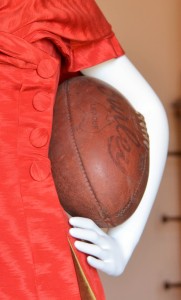 I had no idea the coat over the red ‘football’ dress had gold lining!

When I learned Barwon Park Mansion, Winchelsea, was to hostThe Dressmaker Costume Exhibition, I knew I had to go. It was totally worth it.

The exhibition allows you to soak up the incredible detail and appreciate the workmanship. Even  a non-seamstress like me marveled at the delicate beading, richness of colour and tiny flowers on the hats and headpieces. Of course, the giant poster of Liam Hemsworth as you enter the mansion doesn’t detract from the experience either. At the risk of coming over all Molly Meldrum, if you loved the film, book, or both, do yourself a favour and visit The Dressmaker Costume Exhibition at Barwon Park Mansion, Winchelsea.